US Electrical Infrastructure at a Critical Crossroads, by Andrew Bright

‘Energy Strategy: The Road Not Taken’ is a seminal paper written by Amory Lovins, the Founder of the Rocky Mountain Institute. Lovins explores two different electrical infrastructure paths for the coming 50 years. The first path is a continuation of present federal policy. The second involves a serious commitment to energy efficiency and a rapid deployment of renewables, coupled with transitional fossil-fuels. Lovins argued, convincingly, that the two roads are mutually exclusive; the year was 1976!

Forty-four years later – and renewables are finally being connected to the US grid at scale. However, the grid was originally designed to distribute electricity from large centralized power plants to consumers. For many years, electricity flowed mostly in one direction; from power plants through the transmission grid, to the distribution grid, and finally to the consumers. Electricity supply and demand were predictable, and supply was slowly ramped up and down to match demand.

Meanwhile, the traditional electricity utility business model is under threat. Coal and nuclear plants have been closed or mothballed, leaving many balance sheets saddled with stranded assets that cannibalize funds that could have been invested in the future. This becomes a significant distraction from company management.  At the same time, new market entrants have clean, sustainable (in more ways than one) balance sheets, strong customer engagement and the intention to disrupt traditional business models.

Still not convinced? Read up on the “Steel Mini Mills” case, how Netflix beat Blockbuster, or how the Ubers and AirBNBs of the world fulfilled consumer needs. The main difference, though, is that the electricity utility cannot completely fail, bailouts are used to keep the lights on. In the end, the bill is footed by residential consumers and taxpayers.

Rise of the Prosumer

Renewables, primarily wind and solar, have changed the paradigm of the traditional utility on multiple fronts. Renewable power generation can be large or small, and it can be connected to either the transmission or distribution grid. Electricity now flows in both directions in the distribution grid, and supply is less predictable, due to both intermittent renewables and grid congestion. The most significant shift, perhaps, is occurring in consumers.  They are increasingly no longer passive. Many now have their own generation and storage capabilities with intelligent monitoring systems to optimize loads in real-time across complex rate plans. Consumers are becoming prosumers.

The electrical infrastructure in the United States and many other countries is not equipped to handle this new power generation and distribution model. The distribution grid must become smarter, anticipating supply and demand and then, sourcing and optimizing, accordingly.   The transmission grid must be larger, linking regions with less costly renewable power to the major load centers. Overall, the grids must become more resilient to natural disasters, less frequent hands-on maintenance as well as cyber and physical attacks.

The Utility is Dead, Long Live the Utility

With utilities dealing with a combination of underinvestment in smart distribution infrastructure and the write-offs of generation assets, the traditional business model for electricity is in transition.  Technology and mass production have finally achieved grid parity (or better) for renewables, while disruptive forces like prosumers, digitalization and changing regulation have dramatically affected the grid’s requirements and value proposition. In response, a radical pivot with thoughtful leadership and coordinated planning across multiple stakeholders is beginning to take place in the utilities’ C-suite. Utility 2.0 is coming, but its final form is still unknown.

Utilities are faced with changing technical requirements, and consumers are demanding cleaner power and advanced services. While government regulation should encourage utilities to adapt to a changing market and accelerate progress toward emissions targets, state regulatory systems and the jigsaw of regulated and unregulated markets have often hampered meaningful transformation of the sector. Federal rollbacks have created uncertainty that have further slowed progress & investment.

There will be winners, and there will be losers; PG&E and JEA serve as cautionary tales.  The Utility 2.0 model will require a much clearer value propositions for the consumers served, utilities will need to develop engaging customer services, embrace continuous digital innovation, whilst improving operational efficiency.

And while some utilities are struggling, external players see an opportunity. Decarbonization has forced oil and gas companies to reinvent themselves, and many are moving into the utility space. Danish Oil & Natural Gas (DONG) was a state-owned company founded in 1972 to manage offshore oil & gas resources. In 2002, DONG built the world’s first large-scale offshore wind farm, and today, it is the largest power producer in Denmark (a leader in renewables deployment) and the largest offshore wind company in the world. By 2017, DONG had divested all its oil & gas assets and renamed itself Ørsted. The reincarnation was complete. In the last two years, Ørsted‘s share price has more than doubled. Several Oil & Gas majors are now actively building a presence in the electricity sector, most prominently, Royal Dutch Shell announced plans in 2019 to enter the power market, displacing incumbents with more money, more scale, and more power.

Now for the Challenges:

Time and human capital are required to build a company. Resource requirements increase significantly when integrating that company into an existing enterprise.  Corporate venture models source high-impact companies and focus on strategic and financial returns, but this is often done in a microcosm, isolated from the issues of their parent. To remain relevant and profitable, can a utility revise its business model and adopt a corporate innovation model? Let’s assume “yes,” because there is no alternative – the critical question then becomes: who pays for the transformation as the consumers’ need changes, and with captive customers, who ensures this is done effectively?

Grid and more broadly utility modernization will require a unique blend of public and private capital. The US must learn from and improve upon best practice examples from utilities around the world; as well as from transitions that have taken place in the US in adjacent sectors. Public Private Partnerships (PPPs) funding of new toll roads, for example, provide many valuable lessons for improvement. In addition to PPPs, the bond markets have examples (e.g. Mosaic, Dividend, and Sunnova) which leverage asset-backed securitizations and even Commercial PACE (Property Assessed Clean Energy) to catalyze residential and commercial solar and storage growth.  Commercial finance for SME’s (Small & Medium Enterprises) remains a bottleneck alongside trade professional shortages.

There are, however, already a surprising number of grid upgrade projects that make techno-economic sense and for which enough funding is already available. These projects are not (yet) moving forward due to roadblocks in permitting.  Current projects in New England are good examples. There, several independent projects are seeking to build new HVDC lines to transport cheap carbon-free Canadian hydropower to major load centers in the Northeast US. The most advanced of these is the New England Clean Energy Project (NECEC), where the permitting process has been ongoing since 2017. The permitting process was expected to be complete by Q4-2019, but as of January 2020, most of the required permits had still not been granted.

Utilities are but one piece of a more complex network. Many large cities around the world have defined goals to become smart cities. However, becoming “smart” is easier said than done; after all, what is a smart city? This question is not so simple. Most definitions would include some combination of energy efficiency, low carbon energy supply, sustainable transport (mobility), and advanced digital services. Energy efficiency practices result in marked reductions in total demand, but can developers, contractors and EPCs keep up?  Provided they can scale, imported bulk renewable energy and local distributed renewable energy can further reduce a city’s carbon footprint. Battery storage incorporated at strategic locations will balance out temporary mismatches in energy supply and demand, thereby significantly reducing the need for back-up fossil fuel power and upgrading of distribution. Ideally, a range of sustainable transport solutions are made available to all residents. Electric light rail, EV (buses and cars) and ride-sharing models are ideal but require coordination and action among numerous public and private entities. When these aspects are overlaid with smart, digitally-enabled services, including healthcare, municipal services and safety, we begin to achieve the notional vision of a smart city.

If a city decides to progress towards this goal, with a mutually agreed-upon definition of a smart city, the questions only multiply. Who will do the detailed planning? Who will finance? Who will benefit from the new revenue streams, and who will lose out? Who will manage the implementation, and who will be responsible for their integration?

States, policymakers, and utilities face many of the same challenges and decisions that they faced 50 years ago.  However, the consequences of apathy or indecision are becoming far more obvious, as illustrated by increasing wildfires in Australia, California and elsewhere. There is no longer a dichotomy of paths – renewable vs. fossil, digital vs. analog, smart vs… The road to modernization is complex. We need coordination between knowledgeable stakeholders to guide state legislators towards equitable cost allocation for consumers. At the same time, the industry must encourage competition, reduce the risk of stranded costs, and promote innovation to create a comprehensive grid modernization roadmap.  We are at a crossroads. Which road will we take in 2020 and beyond?

Paul C Watson is a Venture Partner at Climate Impact Capital (CIC) and focuses on power, utility, infrastructure and new energy innovation.  CIC’s mission is to identify and invest into strategic venture opportunities with corporate venture and institutional partners.

Andrew Bright is an expert in the changing dynamics in the grid sector and is currently an Executive Director for Woodside Capital Partners. 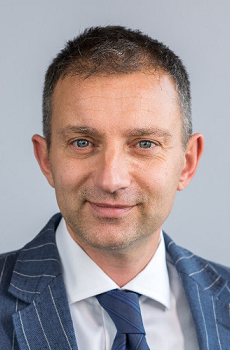