Palo Alto – December 13, 2019 – WCP is proud to announce that digital health investment continued at a solid pace in Q3, albeit slower than the blistery pace during the first half of 2019. According to Rock Health, $1.3B in venture capital was invested in Q3, bringing the total to $5.5B invested thus far across 262 transactions, as shown in Figure 1. 2019 is projected to end with roughly $7.3B invested – the second most robust year on record from a Digital Health investment standpoint, 1.3x more than in 2017, but short of the $8.3B invested in 2018. 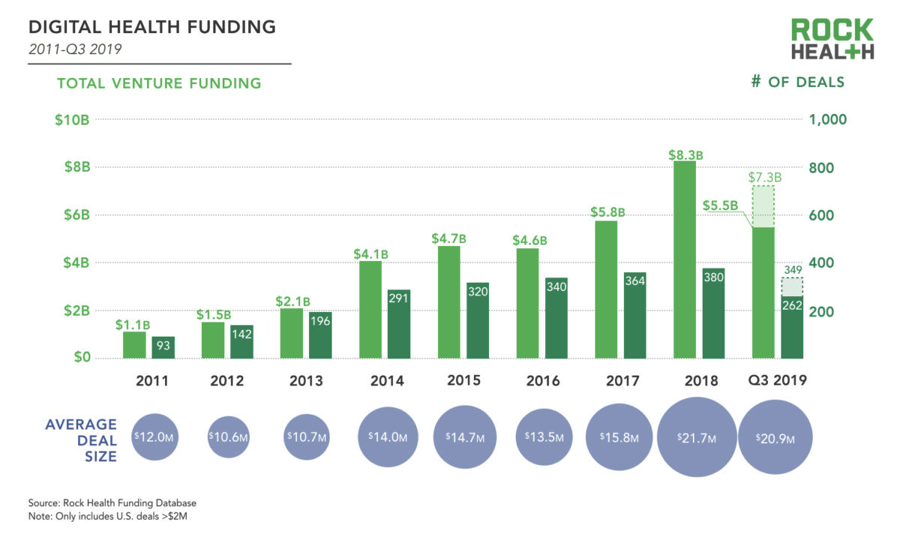 Average deal size continued to scale at $20.9M, similar to $21.7M in 2018, skewed in large part by mega deals (>$100M transactions). Thus far in 2019, there have been nine mega deals (in line with 11 $100M+ deals in 2018), with two new mega deals concluded in Q3. Capsule, the online pharmacy company, raised $200M to compete with Amazon’s Pillpack and Walmart and CVS’ captive offerings. Beta Bionics raised a total of $126M in their tranched Series B to develop and market automated bionic pancreas. However, as Rock Health acknowledges, 2019 will likely be the first year that year-on-year investment drops since Digital Health investments started being tracked as a separate category. While that may be true in the US, Global Digital Health investments continued its upward trajectory through Q3, 2019. According to Mercom, global digital health funding reached $2B in Q3 across 156 deals. We saw a total of $7.2B of funding across 474 deals for the first 9 months of 2019, less than the $8B across 556 deals for the same month bracket in 2018. Globally, Babylon Health raised the most money with $550M. Capsule raised $200M while AllinMD from China raised $100M. 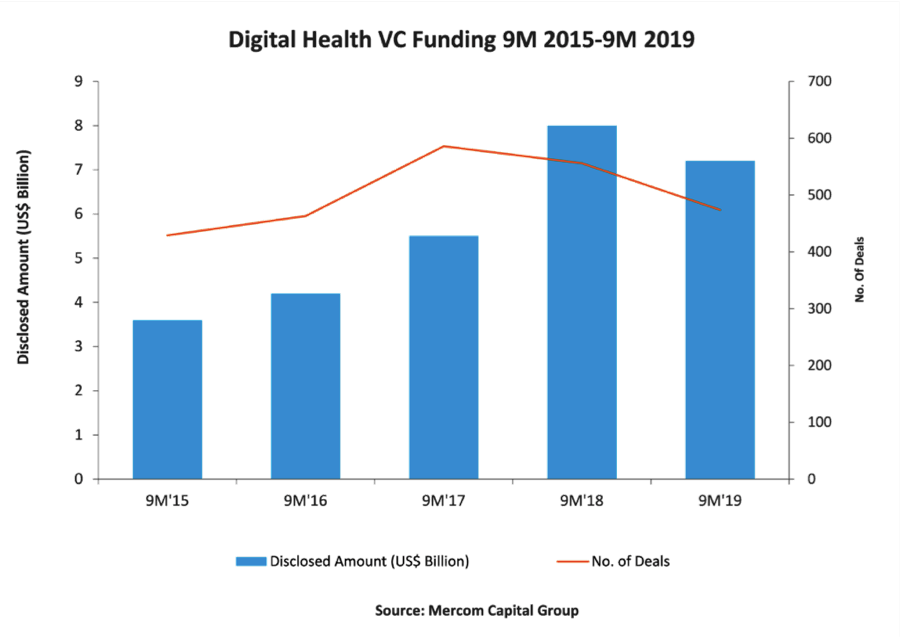 While 2019 has been a watershed year for Digital Health IPO’s, several of the high flyers have not fared that well since their IPO’s. As of October 14, Health Catalyst (NAS: HCAT) was trading more than 20% below its first day closing price of $39.17 (and well below a high of $49.85). Livongo (NAS: LVGO) has plummeted over 50% since its first day closing price of $38.10 (and a subsequent high of $45.68). Phreesia (TSE: PHR) and Change Healthcare (NAS: CHNG) have traded close to their offering price. Perhaps the biggest surprise of the quarter was the highly anticipated Peloton (NAS: PTON) public offering, where the stock price dipped after the company’s IPO and is currently trading about 20% below its IPO price of $27 per share.

Throughout 2019 several verticals within Digital Health have emerged as interesting magnets for investments – behavioral health, senior care and fem-tech (health tech targeting women’s health in particular) seem to have gained momentum this year.

Mental Illness is an epidemic in the US (and increasingly, much of the world is starting to understand and come to grips with the issues). According to National Association of Mental Illness (NAMI), 19.1% of US adults suffered from a mental health issues in 2018 (47.6M) and 16.5% of youth ages 6-17 suffered from a mental illness in 2016 (7.7M). Digital behavioral health is definitely a sector experiencing momentum across the spectrum, from early stage innovations to mature startups raising large financing rounds. The segment is a spectrum of offerings from mental wellness (meditation apps like Calm and Headspace), through treatment of disease, as well as behavioral health platforms such as Lyra Health and Quartet fall in this category. Much of the attention even within enterprises is now focused on employee mental health and wellness.

Throughout Q3, 2019, sixteen behavioral health companies raised $416M, up from just one in 2012 (see Figure 3). Average deal size in 2019 was $26M up over 70% from 2018, compared to the overall digital health deal size being slightly down during the same period. According to Rock Health data, 60% of behavioral health investments are in early stage companies creating a robust pipeline. But the overall deal level data was skewed by several large deals in 2019. Talkspace, a tele-behavioral health company raised $50M; Quartet, a treatment collaboration platform raised $60M; Pear Therapeutics, a substance and opioid abuse prevention platform raised $64M; and Calm, a meditation app raised $88M. 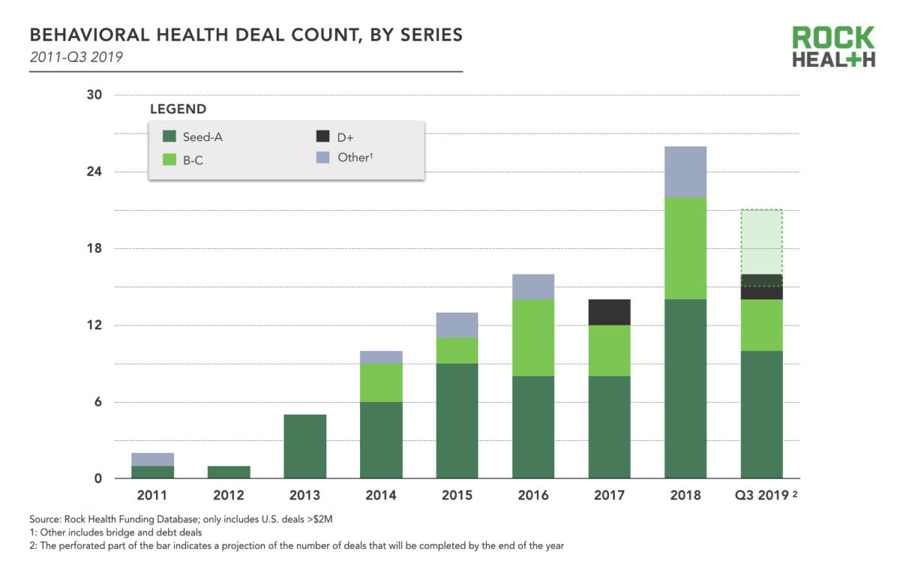 Fem-tech, or investments in companies related to women’s health, is one of the hottest destinations for venture capital currently. Furthermore, entrepreneurs, especially women entrepreneurs are seizing the moment. It also makes sense that women’s health would become a meaningful category by itself, given that women are the primary decision makers when it comes to matters related to healthcare in the home. Some of the more meaningful investments in the category include Nurx, which provides online access to medical providers, delivery of birth control, home HPV testing which raised $52M. The Pill Club, an online prescription and delivery service for birth control and contraceptives, raised $51M. Cleo, a utility for connecting employees with coaches to guide them through pregnancy and subsequent re-entry into the workplace, raised $27.5M. The overall women’s health category is fairly broad covering everything from contraception, fertility, pregnancy, childcare, maternity, OB/GYN and menopause. 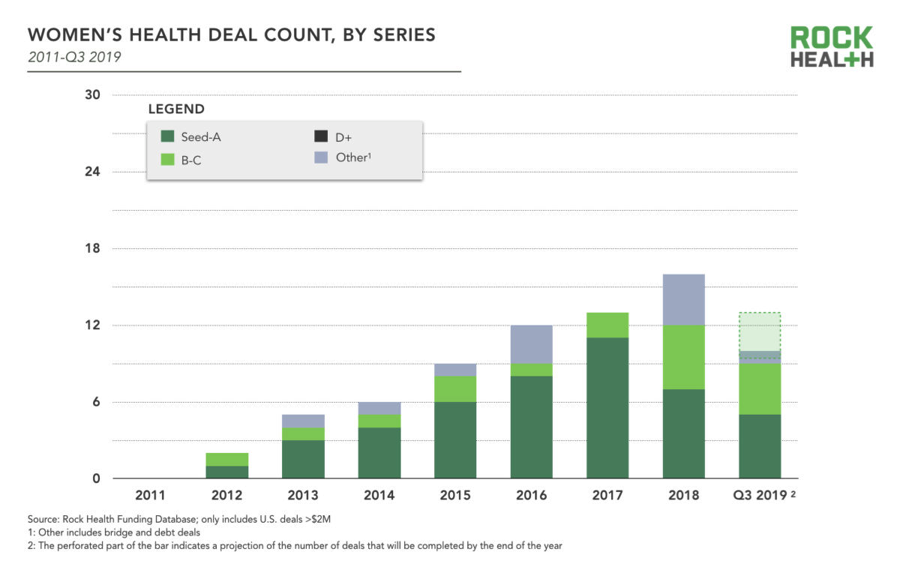 With an aging population and increasing life expectancy, the entire senior care industry is large and growing not only in the US but globally. Here are some numbers to chew on – the elder care market in the US is expected to grow from $100B in 2016 to $225B by 2024 as a result of the elderly population shift. This will place considerable stress on Medicare and Medicaid, but the market is ripe for digital disruption and it’s the digital health entrepreneurs who will address these challenges and create large companies in the process. PRB projects that the number of Americans age 65 and older will more than double from 46M in 2016 to 98M by 2060. The 65+ age group’s share of population will increase from 15% to 24%. By 2025, US providers will face a collective shortage of 500,000 home health aides, 100,000 nursing assistants and 29,000 nurse practitioners according to Mercer. And according to AARP, the number of seniors requiring additional care due to chronic illness will increase from 14% of the senior population to 21% by 2050.

Digital health solutions are beginning to address the senior segment in a meaningful way. Digital Assistants, for example, are being used for millennials and seniors alike according to a Deloitte study (see Figure 5). 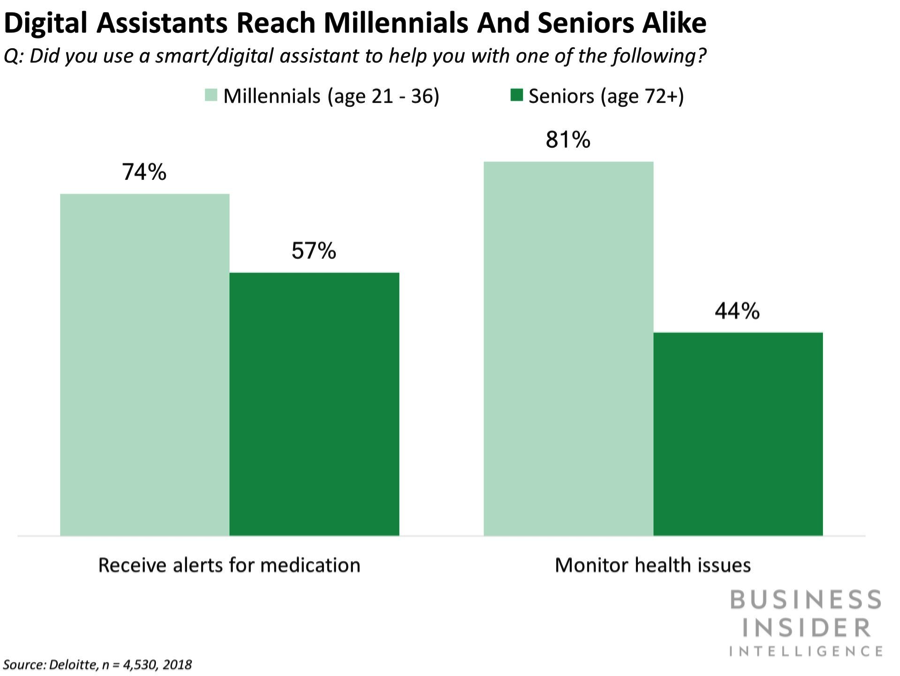 Wearables, telehealth applications, remote monitoring and access, mobile apps for seniors to optimize their diet, exercise, sleep, meditation and medicine are now commonplace for seniors. Voice assistants like Alexa and Google Home are helping seniors remember and comply with their daily schedules. Motion detectors, smart mattresses and personal robots are helping in assisted living environments and improving the quality of life for seniors. Some of the companies going after this market include Honor (with over $100M in funding) and Caremerge. Robotic companion companies like Intuition Robotics and Catalia Health are helping seniors who often suffer from loneliness and isolation. VitalTech and Unaliwear have developed wearables specifically for seniors to detect falls and provide emergency call-out directly from the device. Finally, the ever evolving AI layer will continuously gather data and provide insights and predictability, avoiding situations that often lead to hospital visits and reduced quality of life.

Bottom line: Digital Health is more exciting than ever with continuous advances across a variety of segments. The reason for excitement on the part of entrepreneurs and investors in areas such as women’s health, behavioral health and senior care is because there is a quantifiable ROI to the consumer as well as the payer and health system/provider. It all boils down to healthier living, avoidable hospital admissions, reduction in wasted resources and improvement in overall quality of life.

To discuss anything, feel free to contact Vini Jolly at vini.jolly@woodsidecap.com!

Previous post WCP Acts as Exclusive Financial Advisor to Cortexica in its Acquisition by Zebra Technologies Corporation Next post CES 2020: Everything You Need to Know – Rudy Burger and Mark Bagley, Woodside Capital Partners